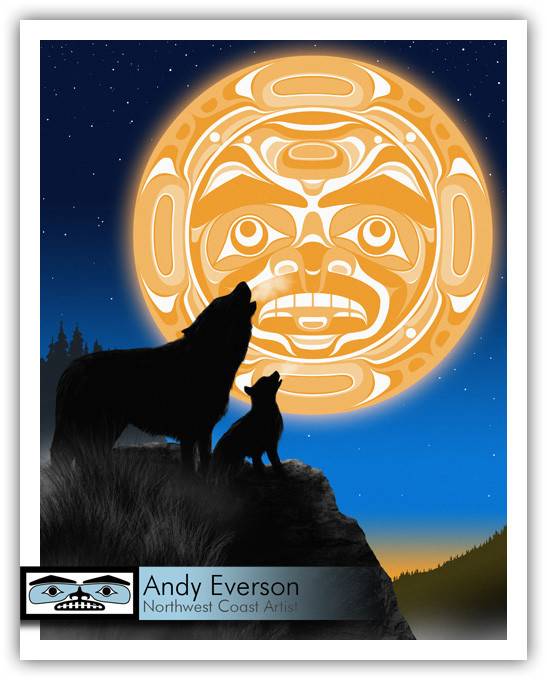 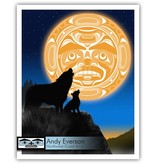 The other night, I woke up at 4 o'clock in the morning with my little son Matthew beside me. I cuddled up with him and had this vision of two wolves singing to the moon. On a rocky crest, their voices mingle. The strong, confident howl of the father and the first strained chords of his son join together to form a new song.

Whenever our dance group, the Kumugwe Dancers, do a dance performance, little Matthew is always at my feet when we enter. I sing with my brothers and he sits or stands right next to me. Often he wears a slightly-too-big chilkat tunic and carries his little drum. At these performances, though, he rarely sings. He watches, shyly, and learns. I know he is absorbing every little detail of our performance. Though quiet, he is learning by taking an active role in his culture. We feel that involving our children in cultural pursuits is one of the best things that we can do and something that our ancestors would be proud of.

Where at performances Matty is shy, at home it is another matter. He grabs his drum, gets down on one knee and chants, "Ha-may Ha-May." He gets his sister and uncle to dance the Bakwas, the Dzunukwa and the Sapa for him as he sings. Other times, he even entices me to dance for him. Shaking a rattle or banging his drum is as much a part of his childhood as playing with his trains. Sometimes, though, we don't have to dance. Matthew and I just look ahead, let our voices mingle and sing a new song. Together.