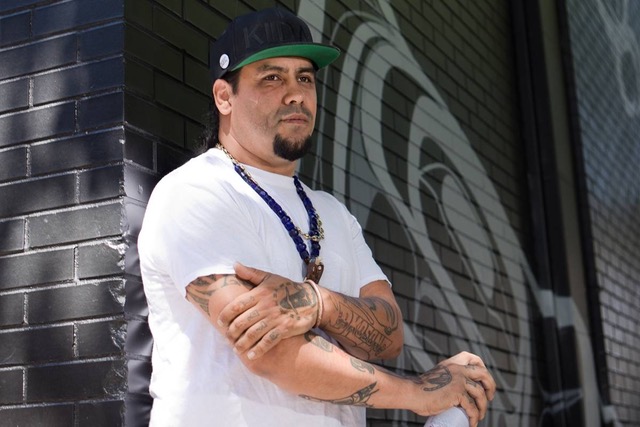 Taakeit Aaya or "Gifted Carver" Haida of the Naikun Raven clan was born in Prince Rupert BC in 1978. He is a great-great grandson of the famed Charles Edenshaw and Louis Collison. Corey graduated from the Langley Fine arts School in 1996. In 2001 he apprenticed under Master Carver Christian White for three years in Haida Gwaii, learning design and wood carving. He is an avid painter, jeweler, wood and argillite carver who enjoys exploring different mediums such as spray paint, which he has used to create large-scale paintings involving urban youth in Vancouver. Corey has carved many totem poles, including a 20' yellow cedar pole for Scouts Canada, a 17' story pole now at Queen Charlotte Lodge, and a 14' mortuary-style memorial, which stands in the Namgis burial ground, Alert Bay, carved in memory of his Haida ancestors who died during the smallpox epidemic inflicted in 1862 and who made their final rest at Bones Bay where Corey erected a large painted cedar panel. He has also carved a pole in New Zealand with Maori Master Lionel Grant and North West Coast carvers Dempsey Bob, Joe David and Christian White. Corey has worked on many other poles under Christian White, Jim Hart, Dwayne Simeon and Beau Dick. He has recently assisted on the 2010 Olympic pole with Klatle Bhi for Petro-Can. Corey has worked beside and learned from many master carvers such as Sharon Hitchcock, Wayne Alfred, Donny Edenshaw, Phil Grey, and Jay Simeon, to name a few. His biggest influences are the old master carvers of the 17th to late 19th century whose skills are left unmatched. Through his study Corey creates functional pieces that can be used in the traditional context of song and dance.