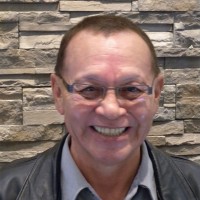 Calvin Bell is an Haida artist that maintains the traditional old style of argillite carving. A member of the Haida Nation, born in Masset, Haida Gwaii in 1950, Calvin's family crests are the Two-Finned Orca and the Grizzly Bear.

Calvin began carving in 1971 after being introduced to the art form by Haida master carver Ron Russ. His carvings include sculptures and jewelry from argillite, gold and silver that feature traditional Haida designs. Calvin’s expertise is evident in each native art piece he creates, his depth of carving, precise inlay, and flawless finish make his work widely collected.