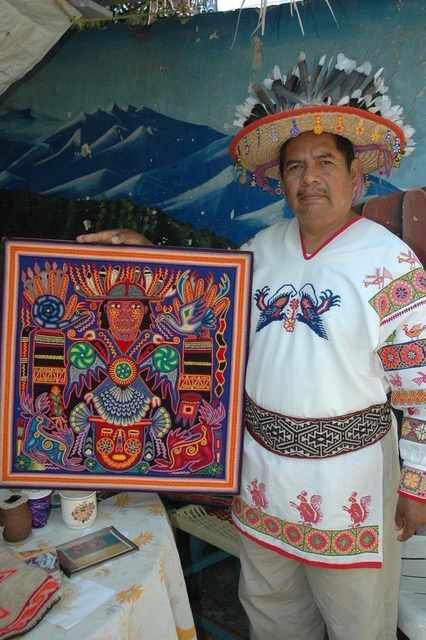 Eliseo Castro Villa is the son of Daniel Castro, and grandson of Hilario Castro one of the most famous shamans in the 1960's.  Eliseo was one of the very first artists from San Andres Cohamiata.  In 1967, his father Daniel Castro, Jacinto Lopez and Antonio Bautista were discovered by the Museum of Anthropology in Mexico City leaving offerings at the Basilica.  They were asked to recreate their sacred offerings and from there started making yarn paintings and beaded figures for the museum based on their peyote visions.  It was not long after his father started working with the Museum of Anthropology that Eliseo started to make yarn paintings to fill the growing demand that the museum had.  In the mid 1970's Eliseo befriended a young anthropologist named Kal Muller who had Eliseo create yarn paintings for exhibitions in the US as well as Europe.  Today he is undoubtedly one of the most collected Huichol artists.  Eliseo is considered a pioneer of the yarn art, his work is prized for its psychedelic look that harks back to the art's primitive beginnings.  Eliseo was first featured in photos on page 86 and 95 in the book Art of the Huichol ed. K. Berin 1978 and recently placed second in the Nayarit State art competition for 2009.