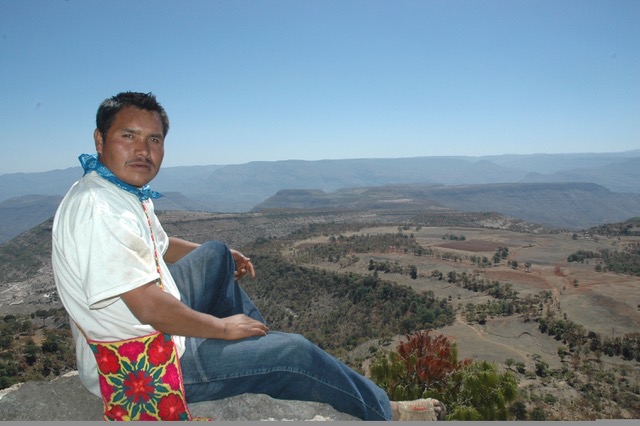 Santos Bautista is an exceptional artist who lives in San Andres Cohamiata the ancient Huichol ceremonial center located deep in the Sierra Madre mountains of Western Mexico. He is the oldest son of Jose Bautista an elder Huichol shaman who has served his community in a number of capacities including the position of Governor, and is widely recognized as one of the pioneers of the bead art. Santos is not only an artist, but is also involved in doing the ceremonies and rituals that define what it means to be Huichol. Santos is currently 'jicarero' for the temple in San Jose. A 5 year cargo that means he is responsible to taking a prayer bowl to all of the ceremonies as well as on all of the pilgrimages to the sacred directions. Just after the new year, together with his grandfather Santos sacrificed a cow to appease his gods. He said that because he uses his god's symbols in his art this sacrifice was necessary to ensure continued success in his art. He took the offerings from that ceremony to the major sanctuaries in the 4 directions.

Today there are over 15,000 Huichol Indians. Just about every Huichol will at one point try their hand at creating art, most however will never be able to create that distinct style that defines a true master.  Color, definition and symmetry are three ways we judge the art, but the real mark of a true artist is that you can distinguish their own distinct style from others' work. Santos trademark style includes extraordinarily straight lines and vibrant color combinations, and the attention to detail that sets his work apart.