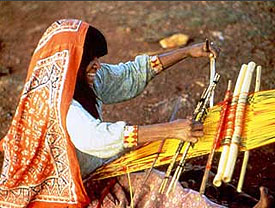 The Huichol (Wixarika in their own language) are a tribe of Native Indians that live in the Sierra Madre mountains of western Mexico. They have preserved much of their culture and way of life into the present by moving to an isolated area high in the mountains, and by fighting against and resisting colonization and assimilation. They continue to speak their language, practice their own religion, make and wear their traditional clothes, and gather and grow their own foods.

Weaving knowledge has been passed down from grandmother to granddaughter since time immemorial.  It’s a spiritual practice that is fundamental to Huichol female identity and culture.  A woman will provide woven items for her family until she is no longer physically able.  Then she will spin yarn for the younger women to weave.  When she passes away her loom will be buried with her.  Takutsi, the great creator goddess is a spinner and weaver, and also a helper to the weavers.

The steps taken in producing a woven textile are - preparing fibers, spinning yarn, laying the warp threads, stringing the loom, and weaving.  Huichol women employ a backstrap loom.  That is a flexible loom composed of strings of yarn and wooden parts.  One end is tied around the woman’s back, and the other around a tree or post.  Spindles and loom parts are hand carved from various trees that have spiritual power to help weavers communicate with the gods.  Traditional fibers continue to be used in woven ceremonial offerings, but have been largely replaced by sheep’s wool in other weavings, although native cotton continues to be used widely.    Traditional vegetable dyes have largely been replaced by commercial dyes.  The Huichol like the bright colors.  Women no longer weave blankets and clothes.  They embroider factory made cloth, and weave belts, straps, and bags.  The time and work previously spent in weaving larger textiles is now invested in finer weaving, double weave, and elaborate designs on smaller articles.

Girls start learning to process fibers that will be made into yarn or thread at about six year old.  They remove seeds from cotton and save them for planting.  They wash wool with soap in the river, then hang it to dry in the sun.  They separate strands of acrylic yarn to be re-spun into finer yarn.  During these times oral history is passed down to them.  Spinning lessons begin about the same time.  Both boys and girls help with making loom tools.  By age 3 or 4 children are able to use knives and machetes.  By 9 they are able to make tools from softwoods.  As young adults they carve the harder woods for loom bars, pickup sticks and battens.  Girls begin learning to string up small looms when very young.  Huichol girls learn to weave by watching and copying more experienced family members, and are supervised by their grandmothers.  The first weaving project is a plain weave bag strap with a geometric design.  By the time a girl reaches puberty she will have already learned to make all her clothes, embroider, and weave plain-weave fabrics.  She now must learn to create double-weave articles, beginning with belts which can be used around the waist, or as headbands, and are strong enough to be used as rope to secure animals.  Then wide men’s belts and bags.

Apprenticeship to become a master artist is a five year commitment.  Usually embroidery, beading and weaving are learned together.  Vows are made that must be fulfilled to complete the commitment.  Single women must abstain from sex, and married women must abstain from extramarital sex for the entire duration.  Guidance from the gods must be sought in dreams.  A shaman must supervise the apprenticeship.  He or she will give instructions concerning which gods, or helper spirits to rely on.  Ceremonies and pilgrimages must be attended.  The required offerings must be made - miniature looms and miniature weavings, as well as prayer arrows, beeswax candles, beaded gourd bowls, and the blood of sacrificed animals are left when asking for help and guidance.  Plant allies such as peyote will be chosen as spirit guides.  Animal allies (particularly reptiles) are also sought to help increase health, knowledge, ability and personal power.  Finally the weaver must sponsor a ceremony that marks the completion of her initiation.  If someone doesn't complete her apprenticeship, she may get sick, or her family may suffer.  Spiritual experience and expression are not separate from acquiring and expressing technical competence.

There are different types or classifications of designs.  Some designs are learned or copied from previous weavings created by family members or ancestors, or seen in ceremonies, photographs, collections, or libraries.  Peyote visions (patterns, colors, and figures) are believed to have much spiritual significance and are reproduced in artwork.  Designs dreamed at night, then woven the next day are believed to be gifts from the spirit world.  ‘Iyari’ (heart memory) designs come from the weaver’s inner self - her heart, her thoughts, her ancestral memory.  Huichol women consider these weavings a part of themselves.  “Designs are like portals into the supernatural world.”

The Huichol make pilgrimages to holy places in the four corners of their land.  They fast during these journeys, and bring sacred water and other spiritual medicines home.  At Lake Chapala in the south, where Xapawiyemeka, the goddess of the lake dwells, offerings are weighted with a stone, then thrown in the lake.  At the Pacific ocean, they immerse themselves in the water, pray, and leave offerings for the goddess Haramara.  They travel to Utuawita, the sacred cave to the north in Durango.  They travel to Wirikuta, the sacred land of peyote in the high desert of San Luis Potosi to the east to communicate with the deities and acquire sacred knowledge from them.

The pilgrimage to Wirikuta to collect peyote is the central event in the Huichol annual ceremonial cycle.  The participants in the pilgrimage, the holy places where the pilgrims stop to leave offerings, and the actions undertaken in the peyote hunt are represented in the parts of the loom.  Ut+anaka, the earth goddess, learned weaving in order to find the path to Wirikuta and make the first journey there.  While the men are out hunting the deer, the women are praying, are in spiritual communication with the deer, calling on him to give himself to feed their people, creating a snare with their loom.  Also,“women trap the soul of the deer and bring it to life in the form of woven designs”.  Deer and peyote are two aspects of the same spirit.  Similarly, every part of the loom has a corresponding object or action in the cultivation of corn.  Deer, maize, and peyote, along with water are the sources of life for the Huichol.  “While weaving on the loom, women metaphorically hunt the deer, find the peyote, and plant the corn and help it to grow.”