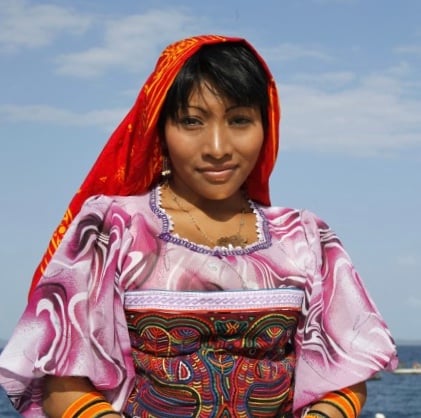 Molas are squares consisting of layers of cloth cut with sissors to depict traditional Kuna designs.  The squares are worn, one in front and one in the back on women's blouses.  This is part of the traditional attire that Kuna women wear at all times.  The creation of molas is the primary artistic and commercial activity of Kuna women.  They train at this from childhood.  Each mola represents a lifetime of study and practice.  They are constructed by sewing together several layers of different coloured cloth, then cutting away parts of each layer to reveal the colours beneath.  Sometimes embroidery is added as well.

The Kuna are a People Native to Panama and Northern Columbia.  They fought a revolution in 1925 in defense of their culture and acheived a semi-autonomous homeland.  This revolution is sometimes called the 'Mola War' because the cause was an attempt to ban Kuna culture and dress.