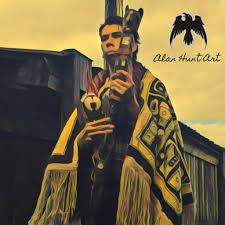 Alan Hunt
Cultural group: Kwakwaka’wakw/Tlingit
Born: 1988
Birthplace: Port Hardy, BC
Alan Hunt is Kwakwaka’wakw and Tlingit and currently resides in Alert Bay, BC where he dedicates himself to the cultural practices of his people as a singer in ceremonies and as an active participant in the potlatch. Alan joined his life with that of his wife in traditional ceremony and received his chieftainship from his grandfather Chief Alfred (Hutch) Hunt in 2015, coming from a long line of great chiefs who were active in ceremony and the preservation of the ways of their people. Alan’s artistic abilities began to emerge as a child and Alan began to carve in 2011 and has the great honor to be mentored by such esteemed master carvers such as Beau Dick, Wayne Alfred, Marcus Alfred, and Bruce Alfred.
Alan’s chieftain name, Kwakwabalasami, means “people come from everywhere to sit and feast with me” and was held by his great-grandfather Jonathan Hunt. In Victoria, the First Peoples Gallery of the Royal BC Museum includes the great house of Chief Kwakwabalasami under agreement with the family with the knowledge that the cultural ownership remains with the family.
Alan has carved in both Kwakwaka’wakw and Tlingit style, honoring his bloodlines with work that embodies the richness of both artistic styles. Alan connects strongly to his ancestors, knowing this connection is essential to his spirit. In carving, Alan connects to his matrilineal bloodlines which include Mungo Martin and Jonathan Hunt (Odi). It is because of these connections that Alan’s approach to carving has been to uphold the discipline of using traditional tools and methods as this bridges Alan and his pieces to his great ancestors thereby embodying great authenticity.
In the future Alan plans to expand upon his work to include utilizing different mediums and also learn the practice of engraving jewelry. Alan enjoys collaborating on pieces and will be working with other artists to produce original works of art.
Click to view Alan's Beau Dick Style Mask