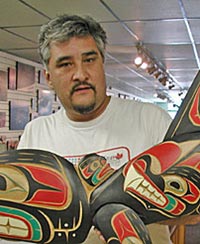 Laurence Scow was born in 1958 at Fort Rupert which is near Port Hardy, British Columbia.  He is a member of the Kwak'waka'wakw Nation.

Although he was born into a long line of carvers, Laurence did not start carving until later in life. He began carving in 1985, inspired by the work of Bill Wilson and Larry Hunt.

His attention to detail and elegant lines makes each piece a complete work of art. He mainly carves Bent Boxes, Paddles, Plaques and Panels and likes to inlay a lot of Abalone into his work.  He also has completed a number of Totems and Talking sticks.