At Cheryl's Trading Post, as well as carrying local Native art, we have art from southern Native tribes - turquoise jewelry from Arizona and New Mexico, peyote art from the Huichol who live high in the Sierra Madres mountains of Mexico, Alebrijes (whimsical creatures) and hand woven rugs from Zapotecs of Oaxaca, textile from the Mayan and Inca of Mexico, and Central and south America, molas from the Kuna of Panama, and vision art from the Shipibo of the Peruvian Amazon.

The Eagle, Quetzal and Condor Fly Together

There is an ancient Inca prophesy which states that ”When the Eagle of the North flies with the Condor of the South, The Spirit of the Land will Reawaken.” The Eagle refers to the Native people of North America, the Quetzal to the Native People of Central America, and the Condor to the Native people of South America. This prophecy is and has been known by many Native Nations in many different forms. There have been meetings during the last 15 to 20 years of representatives from the Indian Nations of the Americas. The purpose of these meetings is to build mutual beneficial relationships. This is all part of a revitalization of Native cultures and values that results in improvement to the wellbeing and prosperity of Native People. Inter-tribal trade is rooted in values of sustainability and respect for the environment. The fulfilling of this prophecy coincided with the end of the Mayan long count calendar. December 21st, 2012 was the final day of a 5,125 year period in human history. Many people believe it is the beginning of a new age, a restoration of the balance between feminine and masculine, a reawakening to the interdependence of life.

The Huichol (Wixarika in their own language) are a tribe of Native Indians that live in the Sierra Madre mountains of western Mexico. They have preserved much of their culture and way of life into the present by moving to an isolated area high in the mountains. They continue to speak their language, make and wear traditional clothes, and gather and grow their own foods. They practice their traditional peyote religion. They create art based on their culture, ceremonies, helper spirits, and visions.  They sell their art for money to buy the things they don't produce themselves on their land. 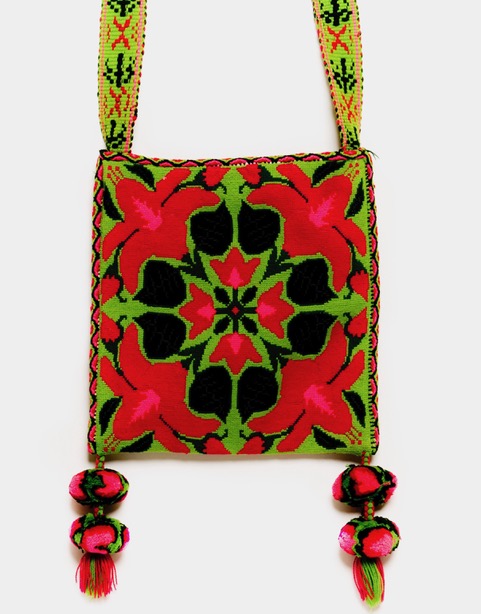 Weaving knowledge has been passed down from grandmother to granddaughter since time immemorial  It’s a spiritual practice that is fundamental to Huichol female identity and culture. They embroider factory made cloth, and weave belts, straps, and bags.  The time and work previously spent in weaving larger textiles is now invested in finer weaving, double weave, and elaborate designs on smaller articles. 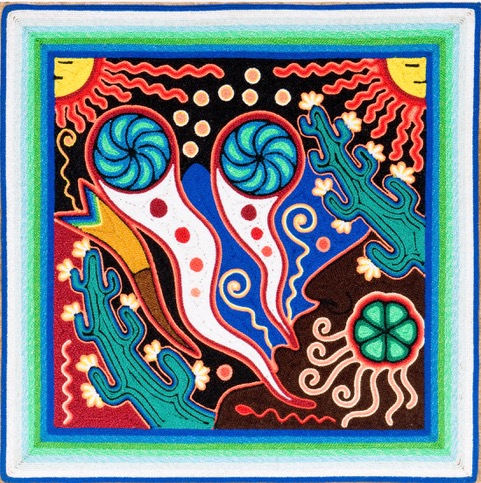 Men make yarn paintings by covering boards with a mixture of beeswax and pitch, then pressing in small pieces of coloured yarn. These colourful, complex representations of ceremonies and visions evolved from a type of spiritual offering. Similarly, wood sculptures and gourd bowls are coated with wax and pitch, then coloured beads are pressed in one at a time. 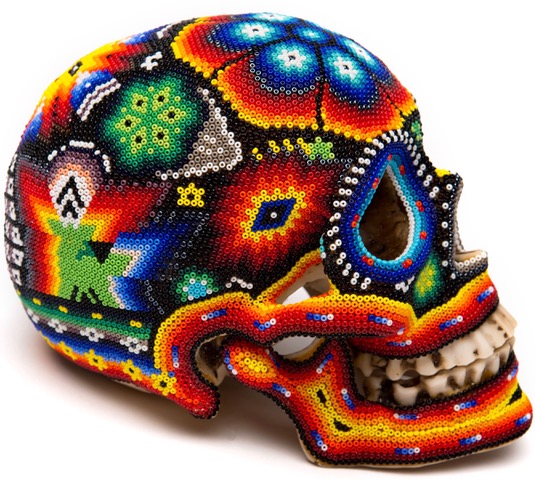 The Huichol make pilgrimages to holy places in the four corners of their land.  They fast during these journeys, and bring sacred water and other spiritual medicines home.  They travel to Lake Chapala in the south, where Xapawiyemeka, the goddess of the lake dwells; and to the Pacific ocean, where they immerse themselves in the water, pray, and leave offerings for the goddess Haramara; also to Utuawita, the sacred cave to the north in Durango. They travel to Wirikuta, the sacred land of peyote in the high desert of San Luis Potosi to the east to communicate with the deities and acquire sacred knowledge from them.

Deer, maize, and peyote, along with water are the sources of life for the Huichol.

The Shipibo are a tribe that live in the Peruvian Amazon in the Pucallpa / Ucayali River region.  They are masters of Ayahuasca, a medicinal tea made from the vines and leaves of jungle plants.  The tea has spiritual properties to heal illnesses and induce visions and revelations.  Shipibo women translate the patterns, visions, and songs they experience into hand painted or embroidered textiles, pottery and jewelry. 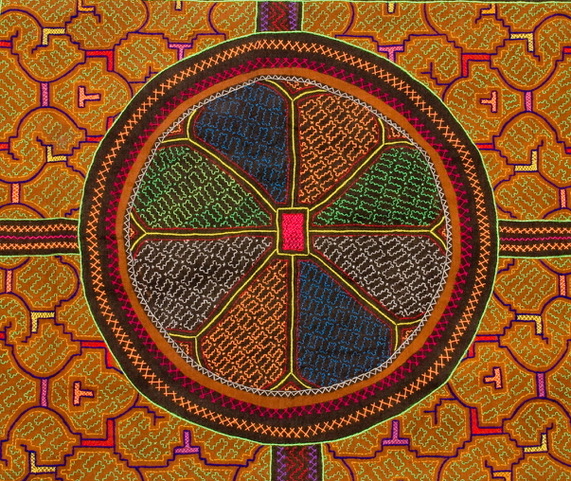 Shipibo designs represent sacred spiritual patterns which permeate creation, perhaps energy patterns.  The designs accompany songs or are songs.  During an Ayahuasca ceremony, a shaman, or Indian doctor will see patterns which he or she will sing.  The song repairs the patterns in the patients body.  The patterns of the doctor, the patient, and the environment all inter-relate with song.  The shaman sees when the geometric healing design is clearly distinct.  The result is a permanent rebalancing of the internal patterning of the patients body.  Patients relate experiencing profound positive changes in their lives afterward.

Shipibo designs are something like a codified musical language, integrating the inner and outer spiritual worlds.  After a ceremony, the women embroider and paint the patterns onto fabric.  They have been trained from childhood to do this.  Smaller motifs all have meanings such as a thinking man, soul of a child, star of the south, leaf of a medicinal plant, a stream of rain, or the southern cross constellation which divides the cosmos into four quadrants.  The entire textile represents the great mother, the creator/creation.  Traditionally in Shipibo villages everything was painted with designs - houses, furniture, pottery, tools, clothing, jewelry, bodies.

The designs are healing designs  Each textile is handmade, and individual and unique.